From the Archive: Guns and Gun Violence Prevention in The ANNALS

The ANNALS has been bringing science to bear on topics of particular social and political concern for 133 years now, and it’s always enlightening to dive into its archives to take stock of the ways in which we’ve made sense of particular social dynamics over time. For some topics, our archive can be a remarkable history of social scientific thought from the progressive era to the present day; for other topics this is less true, but it’s always interesting to take a glimpse at the history of social science through our particular lens. 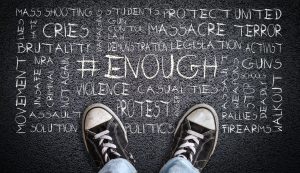 Gun ownership, gun violence, and the proliferation of firearms among both law enforcement and civilians in the United States has been paid intermittent attention in The ANNALS since the early twentieth century. This coverage has increased over the last 50 years as scientists began to pay serious attention to quantifying and analyzing the dynamics of shootings, firearm proliferation, and attitudes towards firearms in the United States.

The earliest references to firearms in The ANNALS appeared in the context of police responses to violent crime, particularly organized crime. As early as 1919, the necessity of a gun for law enforcement officers was taken for granted; in “The Control and Discipline of Police Forces,” Donald Stone wrote, “Policing our great cities is no longer a ‘watch and ward’ affair. A policeman today must be armed with science as well as with a gun.” With regards to civilian use of firearms, 1966’s “Violence and Organized Crime” highlighted the role of guns as “equalizers” for those involved in both the perpetration and prosecution of crime: “Life in a subculture wont to resolve issues with physical force tends to be nasty, brutish, and short. Guns as ‘equalizers’ place a heavy burden upon the individual intent upon survival to present an impervious front—virtually and impossibly.”

Whispers of firearms regulation came to The ANNALS in 1973, in a Q&A with Leslie T. Wilkins after his published article “Crime and Criminal Justice at the Turn of the Century.” Asked about the kinds of crimes that were likely to be of major concern between then and the dawn of the 21st century, Wilkins answered, “I think we shall have to get around to gun control. We shall have to recognize that, in addition to the victim and the offender, the implements and the situation are also concerned in crime. These should be properly looked at and dealt with.”

Our November 1980 volume began to take such a look, but in the context of policing community violence. This was understandable, given that rising rates of crime in the 1970s had provoked a tough-on-crime policy response. That volume, Perspectives on Police and Violence, explored the complexities of the proliferation of firearms in the hands of both law enforcement officers and civilians in the United States. Among other things, contributing authors found guns to be:

Elsewhere in that volume, James Q. Wilson penned “What Can the Police Do About Violence?” and asserted that while “general civilian disarmament is a utopian policy,” Americans are “likely to applaud efforts to deprive would-be offenders of weapons intended for criminal purposes.”

Curiously, though, broader discussions of guns and gun violence as a general social problem (not one that is limited to matters of policing) is limited to our May 1981 volume, which took a head-on look at scholarly research on gun control. Intended to be “relevant to policy, without being strongly prescriptive,” the volume was inspired by the work of George Newton Jr. and Franklin E. Zimring for the National Commission on the Causes and Prevention of Violence in the decade prior. In that volume:

The January 2000 volume of The ANNALS was dedicated to school violence in the United States. Published within a year of the April 1999 Columbine High School shooting, it summarized a conference held in 1998 to address violence in schools. The volume was mostly silent on the issue of guns, but it included beautifully written essays and empirical analyses of what was coming to be seen as a growing crisis of violence in schools.

The ANNALS’ next examination of gun violence came just two years ago, when our former President, Lawrence Sherman, was special editor of the January 2020 volume, titled Fatal Police Shootings: Patterns, Policy and Prevention. “The promise of evidence-based policing is to reduce harm with better research for targeting, testing, and tracking police actions,” wrote Sherman in his introduction, setting the stage for a volume that deployed empirical analyses to an impressive, cumulative effect. The volume included:

Given the fact that 1981 was The ANNALS’ last comprehensive examination of gun violence and gun violence prevention in the U.S., we eagerly anticipate the release of the forthcoming volume 704, tentatively titled Gun Violence in America: What Works and What Is Possible and co-edited by a trio of mid-career scholars: a political scientist, a sociologist, and a public policy analyst. The volume will give readers historical and current analyses of gun violence, gun policy, gun ownership, and public opinion about guns. It will also provide specific analyses of the efficacy of interventions aimed at reducing gun violence, and recommendations for policymakers about reasonable prevention strategies for states and municipalities.