Watch a video recap of the evening here.

On October 3, the AAPSS welcomed five eminent scholars as Fellows of the Academy at its annual gala dinner at the Willard Intercontinental in Washington, DC, with more than 150 guests in attendance, including former staffers of the late Senator Daniel Patrick Moynihan, congressional and executive branch employees, journalists, previous Moynihan Prize recipients, and numerous Fellows of the Academy.

The gala program began with recognition of the 2019 Moynihan Prize winner, former UN Ambassador Samantha Power, who had delivered the annual Daniel Patrick Moynihan lecture earlier in the day. A congratulatory video from former US Secretary of State John Kerry, who was unable to attend the event, was viewed by the gala guests.

Paul Krugman, an economist with expertise in trade and finance and a columnist at the New York Times, was inducted as the 2019 Eleanor Roosevelt Fellow. He was introduced by fellow New York Times op-ed columnist and AAPSS Board member David Leonhardt. In his remarks, Krugman spoke about the importance of social science in mitigating the effects of the recent recession, and noted that going forward, “social science … may be our salvation.”

, the Academy’s 2015 Harold Lasswell Fellow and interim provost at Columbia University, introduced 2019 Ernest W. Burgess Fellow Alondra Nelson, whose acceptance remarks highlighted the study of human genetic science and its implications. Nelson concluded her remarks by noting that the important work for social scientists today is “the work of anticipation, the willingness to take the best of what we know and put that to gesture toward a tentative research agenda that allows us to capture and understand emergent social phenomena. …”

, inducted as the 2019 Walter Lippmann Fellow, was introduced by 2016 Walter Lippmann Fellow Thomas Sugrue, who is Professor of Social and Cultural Analysis and History at New York University.  Lemann’s remarks put journalism in the context of social science, pointing out that journalists can make connections between fields that at universities are usually studied separately, and that they are “trained to make technical topics lively and compelling.” What journalists can offer, he concluded, is “a contribution to social science that is greater than mere transmission of scholars’ findings.” 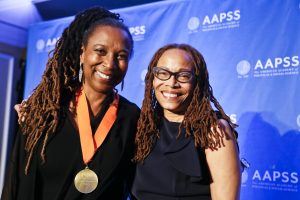 After an introduction by AAPSS Board Member Dorothy Roberts—the George A. Weiss University Professor of Law and Sociology and the Raymond Pace and Sadie Tanner Mossell Alexander Professor of Civil Rights at the University of Pennsylvania Law School—Kimberlé Crenshaw accepted the 2019 Charlotte Perkins Gilman Fellowship. Crenshaw’s remarks described the “why” questions she had asked throughout her life, and the “back talk” those questions often inspired, which led to the development of the concept of intersectionality to more accurately depict the landscape of race and gender in America. 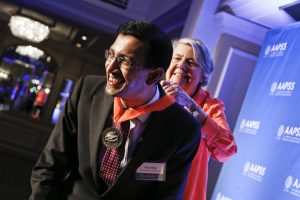 , the 2019 John Kenneth Galbraith Fellow, was the final inductee of the evening. He was introduced by Isabel Sawhill, the 2002 Frances Perkins Fellow and 2016 Moynihan Prize recipient, who is a senior fellow in Economic Studies at the Brookings Institution. In his acceptance remarks, Chetty discussed his research on economic mobility, as well as the work of others that laid the groundwork for that research. Chetty concluded, “Scientific inquiry and policy change in the service of social impact—that’s what John Kenneth Galbraith was about, that’s what [AAPSS] is about, and I’m honored … to contribute to this mission.”

With the addition of this 2019 cohort, there are now 134 Fellows of the Academy. Most are university-based scholars responsible for research that has changed our understanding of human behavior and the world in which we live; others are public servants who have used research and evidence in institutions of government to improve the common good.

“The annual election of a small number of exceptionally distinguished scholars as Academy Fellows never fails to remind us that social science, at its best, is constantly expanding its knowledge base and, on that foundation, honoring its social responsibility as an agent of improvement,” said Kenneth Prewitt, Carnegie Professor of Public Affairs at Columbia University and President of the AAPSS. “It is a pleasure to again celebrate this win-win moment in the life of the Academy.” 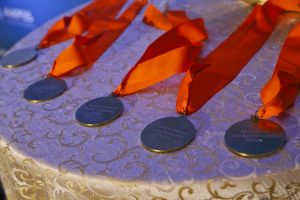