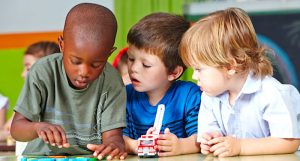 A new longitudinal study, coauthored by AAPSS Fellow Daniel Nagin and published in JAMA Pediatrics, assessed 920 boys from low-income families to identify which behaviors in kindergarten may be associated with earnings in adulthood. The study, which began in 1984, asked teachers to rate five distinct behaviors in boys who were 6 years old and lived in low-income neighborhoods in Montreal, Canada. The authors then tracked the boys’ earnings 30 years later.

The study found that kindergarten teachers’ ratings of inattention—characterized as poor concentration, distractibility, having one’s head in the clouds, and lacking persistence—were associated with lower earnings at age 35 to 36. The teachers’ ratings of prosocial behavior—i.e., social behavior that benefits others, like helping, cooperating, and sharing—were associated with higher earnings for their students. The study adjusted for child IQ at age 13 and family adversity (parents’ education level and occupational status). Three other behaviors—hyperactivity, opposition, and aggression—were also assessed, but the study’s authors found no association with earnings.

“We tried to control for IQ, adverse home conditions and the like, but when we unpacked the relationship between performance in kindergarten and later life success, it wasn’t so surprising that being inattentive led to not being able to keep a job,” said Nagin, professor of public policy and statistics at Carnegie Mellon University’s Heinz College. “But having done a lot of research on childhood physical aggression, I was surprised that the physical aggression was not associated with lower income in the way that inattention was.”

Because the research was observational, causality was not assessed. Further, earnings were tracked through Canadian tax records, which likely do not include earnings obtained informally. And because the study focused only on boys in low-income neighborhoods, its findings are limited in generalizability.

Still, according to the authors, this is the first study to make an explicit connection between prosocial behaviors and higher lifetime earnings. As Nagin points out, “Identifying early childhood behavioral problems associated with economic success or failure is essential for developing targeted interventions that enhance economic prosperity through improved educational attainment and social integration.”