From the Archive: Education and America’s Youth in The ANNALS

Marta Tienda’s reflection about the teaching force in this edition of the Dispatch inspired us to think about how and when The ANNALS has attended to issues of K-16 education over its 130-plus years in publication, which is about as long as compulsory early education has existed in the United States. Here, we present a whirlwind tour of the ways in which The ANNALS has weighed in. 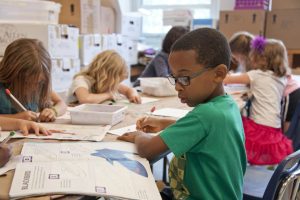 Articles on the education of America’s youth appeared in early volumes of The ANNALS, but always in service to other, broader topics, such as preparation of the workforce. It was not until after the World Wars that The ANNALS began to produce entire volumes centered on education. 1949’s Critical Issues and Trends in American Education (vol. 265) was a benchmark volume for The ANNALS, showing a comprehensive treatment of K-12 schooling for the first time in our publication’s history. It dealt with how schools benefit democracy, the government’s role in education, and trends in pedagogy for the young child.

In the 1950s, Higher Education Under Stress (vol. 301) evaluated the purpose and funding of institutions of higher education, and The Public School and Other Community Services (vol. 302) discussed the role of schools in not only promoting the well-being of children, but also supporting the delivery of other social services to young people and families. The Rising Demand for International Education (vol. 335, 1961) made a case for higher educational opportunities involving international travel or exchange programs, and it included a review of the first fifteen years of the Fulbright Program.

The ANNALS’ next forays into matters of education shifted the attention to postsecondary institutions. In 1971, we published Student Protest (vol. 395), which dealt more with how and why student political movements begin on college campuses, than with the educational enterprise itself. A more comprehensive assessment of the state of American higher education followed in 1972’s American Higher Education: Prospects and Choices (vol. 404). 1980 brought a pair of volumes focused on the providers of higher education: The Academic Profession (vol. 448) explored the state of professoriate, its role, and recent changes in academe, such as tenure, the status of women faculty, and affirmative action; and New Directions in International Education (vol. 449) examined higher education administration and pedagogy.

In 1982, The ANNALS returned its focus to primary and secondary education with Young Children and Social Policy (vol. 461), which brought evidence to bear on social welfare programs more generally, including articles on childcare, early education, and preschool programs such as Head Start. In the 1990s, The ANNALS’ attention to education tended to look to the future, covering topics such as world literacy, the rise of technology in learning environments, and the rising trend of violence in public schools.

Another duo of volumes on higher education came in 2003: Higher Education in the Twenty-First Century (vol. 585) and Community Colleges: New Environments, New Directions (vol. 586). The ANNALS also examined the role of policy over access to higher education in several volumes throughout the 2010s, starting in 2010 with Beyond Admissions: Re-Thinking College Opportunities and Outcomes (vol. 627). The Role of State Policy in Promoting College Access and Success (vol. 655, 2014) and Understanding Student Debt: Who Borrows, the Consequences of Borrowing and the Implications for Federal Policy (vol. 671, 2017) delved further into issues of policy and financial accessibility.

In 2017, we published Inner City Schools: Inequality and Urban Education (vol. 673) and The State of Unequal Educational Opportunity: The Coleman Report 50 Years Later (vol. 674). The ANNALS’ contributions to the study of education over the last forty years have been largely characterized by substantial attention to higher education. While we have covered a wide variety of topics relevant to education, such as poverty, bilingualism, school violence, and international programs, there has been relatively little attention paid to the core enterprise of public schooling: teaching and learning, and workforce preparedness. Perhaps this is understandable, given that The ANNALS is not a specialty journal, but a broad and interdisciplinary one. It’s heartening that we have a volume forthcoming on civic education, but this review has made us solicitous of more interdisciplinary work, specifically on the role of policy and promoting the education of young people.