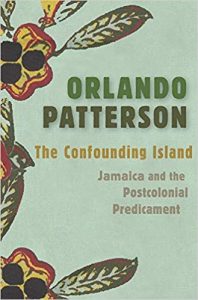 Jamaica, his native land, in his new book, The Confounding Island: Jamaica and the Postcolonial Predicament. Drawing on both a wealth of data and deep knowledge of the island-nation’s history and culture, Patterson aims to investigate and explain Jamaica’s postcolonial successes (its track stars, its music) alongside its failures (high rates of poverty and homicide). The result is both scholarly and personal.

Patterson, who won the National Book Award for his 1991 Freedom in the Making of Western Culture, asks why his homeland has been unable to achieve broad economic growth and why its democratic, stable government has been unable to address problems of widespread violence and pervasive poverty. In his search for answers about the island’s postcolonial condition, Patterson looks back at Jamaica’s colonial history, particularly in comparison with that of another former island colony, Barbados. He also details how political clientelism became a factor in the Jamaican democracy’s early development, and he reexamines the eight years that he spent in the 1970s as adviser to Prime Minister Michael Manley, when a major poverty-reduction program was introduced to the nation (and ultimately failed).

The questions that Patterson takes up are broad, and the answers he offers are complex, with observations on poverty, politics, culture, and economic development that reverberate well beyond the Caribbean.