el Hout was inducted as the 2018 David Riesman Fellow and was introduced by 2017 John Kenneth Galbraith Fellow Timothy Smeeding of the University of Wisconsin, who praised Hout’s interdisciplinary approach to researching social issues.  “He is without a doubt my favorite sociologist,” Smeeding said, “with the exception of my own wife!”  In accepting his fellowship, Hout recalled meeting his fellowship namesake, David Riesman, once and noted that he was famously gracious.  Hout also commented that he believed Riesman would be honored by the fellowship in his name because the Academy and its journal, The ANNALS, is multidisciplinary and, “helps combat the siloing of academic disciplines,” which Riesman warned of. 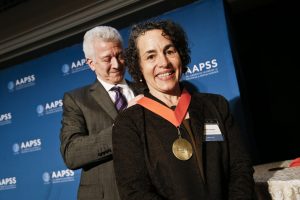 Academy Board member and 2010 John Kenneth Galbraith Fellow Sheldon Danziger, President of the Russell Sage Foundation, introduced Maria Cancian.  Cancian was a student of Danziger’s, whom he hired as a research assistant 30-some years ago.  “Unlike many academics,” Danziger said, “the research that Maria and her colleagues have done, especially on child support, has had a tangible effect on social welfare programs.” In accepting her 2018 John Kenneth Galbraith Fellowship, Cancian addressed the fact that we are in a period where evidence is under attack in favor of conventional wisdom, an idea that Galbraith developed.  “There are many reasons to think about what we believe, what is comfortable, and what is true,” Cancian said. “Even in an academic pursuit of knowledge, we are devoted to notions that are more conventional than true.” 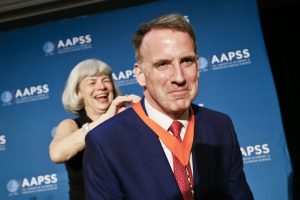 w, Edward Glaeser, was introduced by the former chair of the Academy board, Janice Madden, who told the audience about Glaeser’s love of cities. “Ed has shown us that cities provide what the rich want and what the poor need,” Madden said.  Glaeser saw Simon speak at the University of Chicago while he was a graduate student and was struck by Simon’s intellectual courage.  On his acceptance of the Fellowship, Glaeser said he was, “certain that [their] overlapping interests in the budgets of city governments is what inspired the Academy” to give him the Herbert Simon Fellows 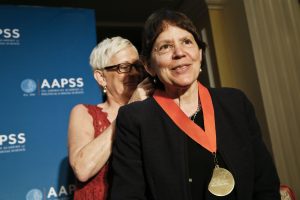 If you want to understand the pressing sociological issues of our time, 2014 Margaret Mead Fellow Kathy Edin told the gala audience to, “ask Jane.” Jane Waldfogel was inducted as the 2018 Margaret Mead Fellow, attributing Mead’s own work to her career choice.  “Mead’s work got me thinking about how you can learn a lot by studying childhood development across context,” Waldgofel said.  In her remarks, Waldfogel thanked colleagues including noted Academy fellows Mary Jo Bane and David Ellwood.  “A small group of thoughtful people really can change the world,” Waldfogel said. 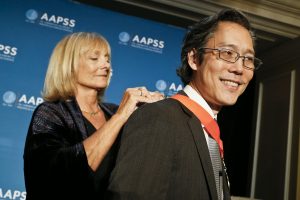 Hirokazu Yoshikawa is a trained classical pianist, but his induction as the 2018 James S. Coleman Fellow was for his work as a psychologist.  The 2004 Margaret Mead Fellow Jeanne Brooks-Gunn told the audience that the “best was saved for last,” as Yoshikawa was the final fellow to be inducted that evening.  During his remarks, Yoshikawa noted that his recent interests, “have been around the issue of social exclusion,” in the vein of James Coleman.  And while Yoshikawa is a trained applied psychologist, the cross-disciplinary approach of the Academy fits his work.  “Research across social science disciplines,” he said, “can make a difference for the most vulnerable children in the world.” 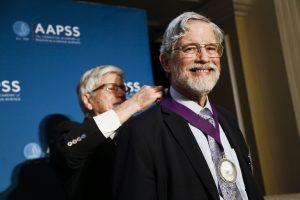 That same evening, the Moynihan Prize was awarded. For the first time, the Prize was given to a natural scientist, John Holdren, who had given the 2018 Daniel Patrick Moynihan Lecture on Social Science and Public Policy earlier that day at the Willard Hotel. A former staffer in the Office of Science and Technology Policy, which Holdren headed for eight years, William Congdon, introduced the Prize recipient, who thanked his mentors and colleagues, as well as his wife, Cheryl, whom he called, “the science advisor’s science advisor.”

Joan Petersilia was inducted as the 2018 Thorsten Sellin Fellow, but was unable to attend the May dinner.

More than 150 guests were in attendance, including former staffers of the late Senator Moynihan, congressional and executive branch employees, journalists, previous Moynihan Prize recipients and numerous Fellows of the Academy. 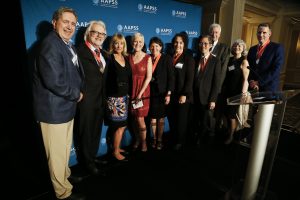