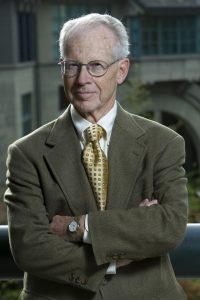 Oliver Williamson, the 2000 AAPSS Charlotte Perkins Gilman Fellow and 2009 Nobel Memorial Prize winner in Economic Sciences, died on May 21 of complications from pneumonia. He was 87.

Williamson’s groundbreaking work on analyzing the structure of organizations involved unconventional ways to analyze markets and business enterprises, challenging common assumptions that markets were always the most rational way to conduct business. As the Nobel committee stated in its citation, Williamson’s economic theory explained “how to handle one of the most basic choices in human organizations,” namely, when decision power should be controlled inside an organization, and when it should be left to the market. This was a particularly important consideration when the Nobel was awarded–in 2009, in the midst of a major recession, when some companies were deemed “too big to fail.” Williamson’s research on the economics of organizations led him to suggest that government should regulate such companies rather than, say, limit their size.

Williamson explored transaction costs—particularly how different types of transaction suit one kind of organization better than another, affecting such decisions as privatization, joint ventures, or whether a company should manufacture a product in-house or purchase it from a supplier. His writings, including his signature book, Markets and Hierarchies, laid the foundation for the new fields of organizational and institutional economics.

Born in Wisconsin on September 27, 1932, Williamson studied for two years at Ripon College, then then spent three years at M.I.T., graduating with a degree in management in 1955. He later earned a master’s in business administration from the Stanford Graduate School of Business, then obtained his Ph.D. in economics from Carnegie-Mellon University in 1963.

AAPSS Fellow Paul Krugman, celebrating Williamson’s Nobel in 2009, called it “an award for institutional economics.” He stated, “Oliver Williamson’s work underlies a tremendous amount of modern economic thinking; I know it because of the attempts to model multinational corporations, almost all of which rely to some degree on his ideas.”