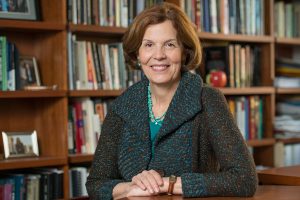 Joan Petersilia, the 2018 AAPSS Thorsten Sellin Fellow, died of ovarian cancer on September 23 at the age of 68. Over her extraordinary 40-year career, she studied the performance of U.S. criminal justice agencies and was instrumental in affecting sentencing and corrections reform, both in California and throughout the United States. She was the author of eleven books about crime and public policy, and her innovative research on parole reform, prisoner reintegration, and sentencing policy fueled changes in criminal justice policies throughout the nation. She analyzed highly politicized issues in an impartial, data-driven way and used rigorous empirical research to develop consequential policy recommendations.

“Joan conducted rigorous research that was directly relevant to the most pressing criminal justice policy issues of the day. She was clear-eyed and laser focused on evidence, not ideology or popular sentiment,” remembered John Laub, Distinguished University Professor in the Department of Criminology and Criminal Justice at the University of Maryland, College Park, and the 2015 AAPSS Thorsten Sellin Fellow.  “She was a warm and caring person and all who encountered her were touched by her generous spirit.”

Petersilia earned her BA in sociology from Loyola University of Los Angeles in 1972, her MA in sociology from The Ohio State University in 1974, and her PhD in criminology, law, and society at the University of California–Irvine (UCI) in 1990. She began her career in 1989 at RAND, where she was a senior researcher and director of the Criminal Justice Program while coediting the series Crime and Public Policy with political scientist James Q. Wilson. In 1992, she became a member of the faculty at UCI, where she was founding director of the Center for Evidence-Based Corrections.

Inspired in the late 1990s by her two sons with developmental disabilities, Petersilia began to break new ground by examining how the justice system deals with the developmentally disabled. Her research demonstrated that people with developmental disabilities are disproportionately likely to be involved in the criminal justice system as both victims of crime and people who commit crime, which created a significant public policy problem. Drawing in part on this research, in 1998 the U.S. Congress passed the “Crime Victims with Disabilities Awareness Act,” signed by President Bill Clinton.

Petersilia’s classic book When Prisoners Come Home was published in 2003, using both qualitative and quantitative data to critically examine the problems surrounding prisoner reentry. In its wake, Petersilia served as an advisor to California’s then-governor, Arnold Schwarzenegger, and later to Governor Jerry Brown. She helped to reorganize juvenile and adult corrections in the state and worked with the state legislature to implement prison and parole reform, leaving a substantial mark on California criminal justice policy.

Petersilia joined the faculty of Stanford Law School in 2009 and became Adelbert H. Sweet Professor of Law as well as faculty codirector of the Stanford Criminal Justice Center. There, she focused on policies related to crime control, sentencing, and corrections, and developed nonpartisan analyses and recommendations intended to aid public officials, legal practitioners, and the public in understanding criminal justice policy at the state and national levels. She taught classes at Stanford Law School on juvenile justice, prisons, community corrections, policy analysis, research methods, and criminal sentencing.

Petersilia was honored with the Stockholm Prize in Criminology (the most prestigious award a criminologist can receive) for her work on prisoner reentry and supporting ex-offenders following release from prison. She was chosen by Stanford University as the recipient of the 2013 Roland Volunteer Service Prize, which recognizes a single Stanford faculty member annually who involves students in integrating academic scholarship with significant volunteer service. She was also awarded an honorary Doctor of Public Policy by the Pardee RAND Graduate School in 2014.  She was an elected Fellow of the American Society of Criminology, and she received its Vollmer Award for scholarship and professional activities that have made outstanding contributions to justice or to the treatment or prevention of criminal or delinquent behavior.

“Petersilia enjoyed a national and international reputation among scholars, policymakers and practitioners alike as someone who effectively took research beyond the walls of academe and into the belly of the criminal justice system, especially corrections,” UCI stated in a remembrance. “Always asking policy-relevant questions, she was greatly respected for her ability to analyze highly politicized issues in a fair, impartial, and data-driven manner and to cast light on such issues by utilizing rigorous empirical research.”

Over the course of her career, Dr. Petersilia was president of the American Society of Criminology; president of the California Association for Criminal Justice Research; codirector of the National Research Council’s study on Community Supervision and Desistance from Crime; director of the National Research Council’s study on Crime Victims with Developmental Disabilities; and coeditor of The Annual Review of Criminology. No doubt expressing a shared sentiment among many, John Laub also remarked, “Joan Petersilia was a stellar researcher and her contributions and insights will be sorely missed by the field of criminology.”