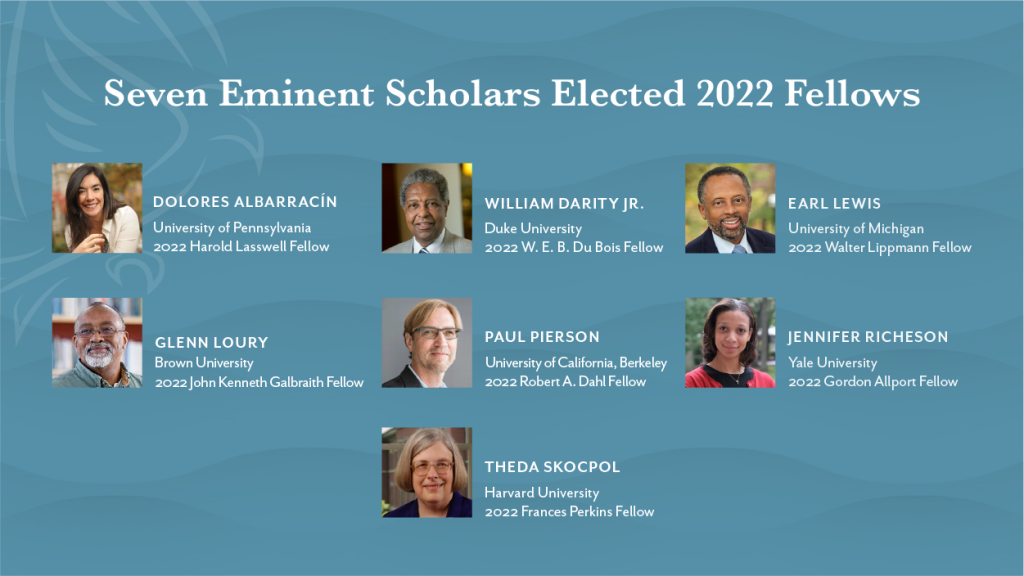 The Academy will induct seven extraordinarily accomplished scholars as its 2022 cohort of Fellows at an event to be held in Philadelphia later this year. The AAPSS inducts a new cohort of Fellows each year, in recognition of contributions that advance science and deepen public understanding of human behavior and social dynamics.

“Each year, the Academy welcomes a new class of Fellows whose influential research showcases the importance of the social sciences in addressing issues ranging from racial and economic inequality to extremism in political parties,” said Marta Tienda, president of AAPSS. “The 2022 class of AAPSS Fellows includes social and political scientists whose distinguished scholarship has and continues to elevate prominent policy discussions.”

The Academy now has 152 Fellows in total. Most are university-based scholars responsible for research that has changed our understanding of human behavior and the world in which we live; others are public servants who have used research and evidence in institutions of government to advance the common good.

Dolores Albarracín, a scholar of communications and behavior who focuses on persuasion, especially in interventions aimed at promoting public health. Her research focuses on the formation of beliefs, attitudes, and goals, particularly those that are socially beneficial. Albarracín is the Alexandra Heyman Nash Penn Integrates Knowledge Professor at the Annenberg School for Communication at the University of Pennsylvania where she also directs the Social Action Lab. She is the Academy’s 2022 Harold Lasswell Fellow.

William “Sandy” Darity, Jr., an economist whose work has been formative in our understanding of racial, ethnic, and class inequality, stratification, and many other topics at the intersection of economics and race. He is the Samuel DuBois Cook Professor of Public Policy, African and African American Studies, and Economics at Duke University, where he also directs the Samuel DuBois Cook Center on Social Equity. Darity is the Academy’s 2022 W. E. B. Du Bois Fellow.

Earl Lewis, a noted historian of African American history and the history of diversity in the United States. He is also a former president of the Andrew W. Mellon Foundation and an academic administrator who is the founder and current director of the Center for Social Solutions at the University of Michigan, where he is the Thomas C. Holt Distinguished University Professor of History, Afroamerican and African Studies, and Public Policy. He is the Academy’s 2022 Walter Lippmann Fellow.

Glenn Loury, an economist and the Merton P. Stoltz Professor of the Social Sciences and Professor of Economics at Brown University. His scholarly work on applied microeconomic theory and the economics of race and inequality has made his an influential voice on racial differences, inequality, and affirmative action in the United States. He has also worked extensively on applied microeconomic theory, game theory, industrial organization, and natural resource economics. He is the Academy’s 2022 John Kenneth Galbraith Fellow.

Paul Pierson, a political scientist whose expertise is in American politics and public policy, comparative political economy, and social theory. He is the author of numerous books and academic papers on American politics, and is a public intellectual and regular commentator on public affairs in national news outlets. Pierson is the John Gross Professor of Political Science at the University of California at Berkeley, and is AAPSS’s 2022 Robert A. Dahl Fellow.

Jennifer Richeson, a social psychologist who studies racial identity and interracial interactions. Much of her recent work examines how people reason about and respond to societal inequality and injustice. She is currently the Philip R. Allen Professor of Psychology at Yale University where she heads the Social Perception and Communication Lab. Richeson is the AAPSS 2022 Gordon Allport Fellow.

Theda Skocpol, a sociologist and political scientist whose work has significantly influenced her fields of study. Her prodigious body of research has focused on health care reform, public policy, and civic engagement amid growing inequality and polarization in our democracy. She is currently the Victor S. Thomas Professor of Government and Sociology at Harvard University. She is also founder and director of the Scholars Strategy Network. She is the AAPSS 2022 Frances Perkins Fellow.