On April 26, 2021, the U.S. Census Bureau delivered results of the Census 2020 to the president that are to be used for apportioning seats in the U. S. House of Representatives, as the U.S. Constitution mandates. With census results in hand, states began the process of aligning our political representation to a demography that is rapidly changing. Whether the nation will be well-served by the realignment is an open question.

The success of Census 2020 is remarkable because it was the first to invite households to respond online; because its rollout coincided with the onset of the coronavirus pandemic, which required changes in procedures and an altered timeline; and because natural disasters disrupted field operations during the final weeks of the enumeration.   Early estimates by the Urban Institute indicate a net undercount of about 1.6 million people, or approximately 0.5% of the total population, which is higher than Census 2010 but in line with the net undercount in 2000.

It is too early to fully appreciate the dimensions of the undercount; however, estimates prepared by the Urban Institute suggest that Blacks and Hispanics were undercounted by 2.5 and 2.2 percent, respectively, and that young children were undercounted by nearly 5 percent.  What is more, households with one or more noncitizens were undercounted by more than 3 percent. This aspect of the undercount likely reflects a fourth formidable challenge faced by the Bureau in the 2020 Census cycle: unprecedented political meddling, the extent of which has come to light with the release of internal documents.  Using enforcement of the Voting Rights Act as a pretext, the Trump administration sought to add a citizenship question to the census schedule.  Although ultimately disallowed by the courts, the failed attempt at political interference likely dampened response rates in states with large foreign-born populations. Further efforts to exclude undocumented migrants from the enumeration also failed owing to strategic pushback from Bureau statisticians. The Census Act of 1790 established “place of residence” as the basis of enumeration and historically has included noncitizens whose usual place of residence is the United States. Despite numerous attempts to exclude noncitizens from apportionment counts, the Supreme Court has consistently upheld that apportionment is based on all persons.

Since 2010, the total resident population of the United States has increased 7.4 percent, with increases favoring the South and Southwest. Seven states (CA, IL, MI, NY, OH, PA, and WV) lost one congressional seat—New York by a very slim margin—and six states gained seats (OR, NC, MT, FL, CO, and TX).  Texas was the only state to gain two seats in Congress based on the 2020 enumeration and was the only state to acquire four seats based on the 2010 census. With apportionment settled, redistricting is now center stage in the states that either lost or gained seats in Congress. 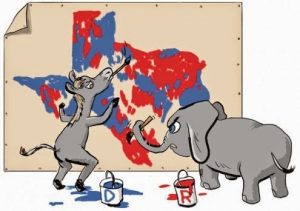 The current redistricting process will take place against the backdrop of a diluted Voting Rights Act (VRA).  In 2013 the Supreme Court ruled that the formulas used in states with a history of discrimination were out of date and therefore required revision, but a deeply divided Congress refused to act on reforms that were proposed. Section 2 of the VRA, which was a response to aggressive gerrymandering, also has been weakened. Although the Court acknowledged that partisan gerrymandering is harmful, the opinion ruled that redistricting decisions fall outside of its discretion.

According to the Brennan Center for Justice, these developments are concerning for two reasons. First, map drawers now have access to  powerful tools and detailed data about voter behavior, which can be used for partisan gerrymandering in states where single party commissions control the process. Redistricting based on Census 2020 will be done by independent commissions or divided government in less than half of the states. Second, unlike apportionment—which has used the method of equal proportions to allocate seats in the U.S. House of Representatives since 1940—states have discretion in specifying demographic criteria for drawing legislative and local government districts.  Although such practices would surely be challenged in court, the ensuing political discourse can only deepen partisan divides irrespective of the outcomes.

Passing comprehensive reforms to strengthen voter protection are highly unlikely in the 117th Congress, but a single provision—requiring independent or bipartisan commissions to design congressional districts—would represent a formidable step in realigning America’s demography with democracy.