The Academy is pleased to announce that former ambassador to the United Nations, Samantha Power, has been selected as the recipient of the 2019 Daniel Patrick Moynihan Prize.  She will deliver the annual Moynihan Lecture on October 3, 2019, at 4:00pm at the Willard Intercontinental Hotel in Washington, D.C. 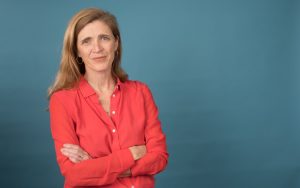 Academy President Kenneth Prewitt said of Power, “As Ambassador to the United Nations – a post once held by Pat Moynihan – Ambassador Power fearlessly blended deep academic knowledge with compelling moral reasoning, becoming a global voice against humanitarian crises. She honors the late Ambassador, and the AAPSS,  in accepting the 2019 Moynihan Prize, and reminds social science around the world that it has a moral obligation as well as academic task.”

Power served as the 28th U.S. Permanent Representative to the United Nations from 2013 to 2017, where she became the public face of U.S. diplomacy at the UN.  She advanced US policies at the UN, including opposition of Russian aggression in Crimea and Syria, negotiated tough sanctions against North Korea, help create new international law to dismantle ISIL’s financial networks, and worked to release political prisoners around the world.

Ambassador Power currently serves as the Anna Lindh Professor of the Practice of Global Leadership and Public Policy at Harvard Kennedy School and Professor of Practice at Harvard Law School.