The Academy mourns the loss of Alan B. Kreuger, 58, who died on March 16, 2019. A Fellow of the Academy since 2004, Kreuger was awarded the Daniel Patrick Moynihan Prize in 2017. The prize is given by the AAPSS each year to leaders who contribute to social progress by applying social scientific evidence to critical national concerns and to public policymaking.

Kreuger, a labor economist by training, published widely on the economics of education, unemployment, labor demand, income distribution, social insurance, labor market regulation, terrorism, and environmental economics. He was the James Madison Professor of Political Economy at Princeton University, where he held a joint appointment in the Economics Department and the Woodrow Wilson School. He was also the founding Director of the Princeton University Survey Research Center.

Krueger was an adviser to two presidents. He was the Labor Department’s chief economist from 1994 to 1995, under President Bill Clinton. He then served as an assistant secretary of the Treasury from 2009 to 2010, and as the chairman of the Council of Economic Advisers from 2011 to 2013, under President Barack Obama. 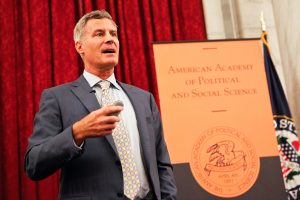 Krueger graduated with honors from Cornell University in 1983 and earned a Ph.D. in Economics from Harvard University in 1987. He was the author of What Makes a Terrorist; Education Matters: A Selection of Essays on Education; and The Class Size Debate; co-author of Myth and Measurement: The New Economics of the Minimum Wage; Inequality in American: What Role for Human Capital Policies? and Wages, School Quality, and Employment Demand; and editor of Measuring the Subjective Well-Being of Nations: National Accounts of Time Use and Well-Being. His new book, Rockonomics: A Backstage Tour of What the Music Industry Can Teach Us about Economics and Life, will be published in June.

In introducing Krueger’s Daniel Patrick Moynihan Lecture on Social Science and Public Policy in 2017, Senator Mark Warner (D-VA) noted that Krueger’s evidence-based policy solutions often transcended partisanship: “In academic and public policy settings, Krueger has always been on the side of using the data to get policy right.”

“The Academy annually presents a Moynihan award for exemplary service to the nation and exemplary contribution to the social sciences.  Alan easily merited that award, as the unanimity of the Academy’s selection process testifies,” stated AAPSS President Ken Prewitt. “He is a loss to family, friends, and colleagues.  We are all saddened.”