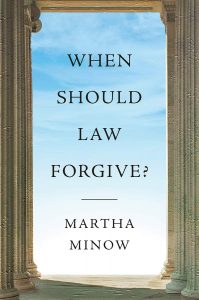 In a new book, Martha Minow, the AAPSS 2017 Eleanor Roosevelt Fellow, asks what forgiveness can achieve in this age of resentment.

When Should Law Forgive? explores the complicated intersection between law, justice, and forgiveness, asking both whether law should encourage individuals to forgive and under what circumstances the courts, public officials, and specific laws should consider forgiveness.

Minow, who has taught at Harvard Law School since 1981, is an expert in human rights and advocacy for members of racial and religious minorities and for women, children, and persons with disabilities. In her book, she acknowledges that there are grounds for both individuals and societies to withhold forgiveness, but she argues that there are also many places where letting go of justified grievances can make law more just, not less.

Minow shows that the propriety of forgiveness is a central question raised by disparate situations, including terrible crimes committed by child soldiers, corporate and personal bankruptcies, and presidential pardons for unrepentant criminals. Should a just legal system offer forgiveness for these cases? If so, under what conditions?  Lawful forgiveness, Minow suggests, could not only strengthen law and democracy, but also nudge individuals and societies beyond resentment and condemnation, and toward respect and generosity.