Academy Fellow Kathleen Hall Jamieson, Director of the Annenberg Public Policy Center at the University of Pennsylvania, has published a comprehensive examination of Russian influence in the 2016 presidential election.  Cyberwar: How Russian Hackers and Trolls Helped Elect a President takes an in-depth look at what Jamieson calls Russian “subterfuge” in the 2016 presidential election. 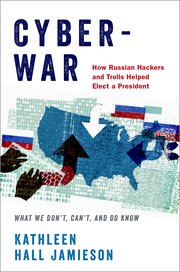 “I want to call this a cyber-attack,” Jamieson said.  The Russians, she says, “infiltrated our private spaces—emails, servers, social media pages—and pretended to be something they weren’t in an effort to mobilize those leaning toward voting for Trump and demobilizing those leaning towards Clinton.”

While it is difficult to determine how many voters were potentially swayed by Russian disinformation, Jamieson believes that Donald Trump would not be president today without Russian influence.

Jamieson recommends that Americans arm themselves with how to identify misinformation on social media.  First, be suspicious and check out the information if you are doubtful of its accuracy. Second, make sure it is worthy of being shared before sharing. And last, take a step back before acting on any content that appeals to anger, prejudice, or fear.

Americans don’t want to further spread disinformation, Jamieson says, and knowing what is false is the first step.  “There is some genuinely ugly troll content out there,” Jamieson says. American must be wary of it.