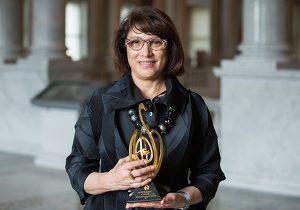 On September 13, 2018, Academy Fellow Mahzarin Banaji of Harvard University, and colleagues Anthony Greenwald of Washington University and Brian Nosek of the University of Virginia, were awarded the 2019 Golden Goose Award for their research on implicit bias.

Banaji and Greenwald began to work on ideas around implicit bias while working together at The Ohio State University, when Banaji was a graduate student there.  Their work investigated why there was a gender bias when participants were asked to judge whether a male or female name was considered famous even though participants recalled these names from memory equally well.  With help from National Science Foundation funding, Banaji and Greenwald were able to continue to conduct experiments and research on what came to be known as implicit bias via an Implicit Association Test (IAT).

In the decades that followed, Banaji (now at Yale) and Greenwald (now at Washington University) conducted more IATs that continued to show evidence of implicit bias among test takers.  The results of their studies were met with some resistance, though, even as implicit bias differs from prejudice, the latter being a conscious bias. In 1996, Nozek joined Banaji at Yale and, using his computer science background, expanded their implicit bias research.

Nozek created Project Implicit, a site where people are free to take IATs.  Within a month of the site going live in 1998, 50,000 responses were received.  Data collected from Project Implicit are used today in business, by police departments, in class rooms, and throughout research centers to carry out and implement unbiased research, tactics, and policies.

The Golden Goose Awards were established in 2012 to recognize scientists whose federally funded research has led to break throughs which have a significant and lasting impact on society.