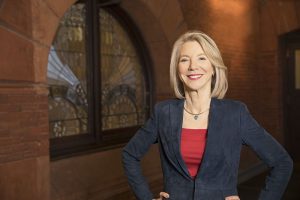 Amy Gutmann, the 2002 AAPSS W.E.B. Du Bois Fellow, was confirmed as the U.S. ambassador to Germany on February 8 by a vote of 54-42. She had been nominated to the ambassadorship by President Joe Biden in July 2021; upon her confirmation, she resigned as president of the University of Pennsylvania, a position she had held for 18 years.

Gutmann’s father, Kurt, was German; he and his family fled the country in the 1930s as the Nazi party came into power. “To go to the country that my father had to flee and to go as the U.S. ambassador is just historically meaningful,” she said. “Not just to me…. It shows what an alliance — what the U.S. working with Germany — was able to accomplish over a time period…. [S]adly, my father never got to live to see [that].”

In addition to her role as president, Gutmann was the Christopher H. Browne Distinguished Professor of Political Science and Professor of Communication in the Annenberg School of Communication at the University of Pennsylvania, with secondary faculty appointments in Philosophy in the School of Arts and Science and the Graduate School of Education. She has published widely on the value of education and deliberation in democracy, on the importance of access to higher education and health care, on identity politics, and on the essential role of ethics—especially professional and political ethics—in public affairs.