On July 19, the Academy joined the Brookings Institution for an event marking the publication of the July 2018 volume of THE ANNALS, Evidence-Based Social Policy: The Promise and Challenges of a Movement. The volume, edited by 2016 Moynihan Prize Co-Recipient Ron Haskins, contains 17 papers by leading policy-makers and experts on the history and major elements of the movement toward evidence-based policy; the ways in which the movement is shaped by government and private institutions; and the significance of the progress that has been made. 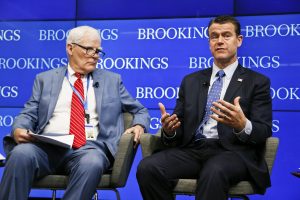 Senators Todd Young (R-IN) and Tom Carper (D-DE), both of whom contributed to the volume, opened the event with commentary about using evidence as policy-makers.  “One of my core values,” Senator Carper said, “is [to] find out what works, and do more of that.”  He noted that he uses data that are generated by various organizations to help evaluate how well programs work or how programs can be changed to be more efficient. Referencing such a program—the Nurse Family Partnership—Senator Young echoed, “… the outcomes are markedly improved by this program.  We know this, and the evidence is strong. The idea is to avoid the human and financial costs of sub-optimal interventions with such a partnership.”

After the comments by the senators, a panel comprising Russ Whitehurst (founding Director of the Institute for Education Sciences), Adam Gamoran (President of the W.T. Grant Foundation), and George Overholser (creator of the Pay for Success model of investment in social welfare programs), each of whom contributed to the volume, discussed the movement and how it is holding up in the Trump administration.

You can watch a recording of the event at Brookings here.