Esther Duflo, the AAPSS 2016 Sir Arthur Lewis Fellow whose work has helped transform antipoverty research and relief efforts, has been awarded the 2019 Nobel Prize in Economic Sciences. She shares the prize with her husband, fellow MIT professor Abhijit Banerjee, and Harvard University economist Michael Kremer. At age 46, she is the youngest person ever to receive the award, and only the second woman. 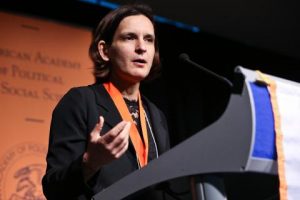 In its citation, the Nobel Prize committee noted that Duflo and her co-awardees “introduced a new approach to obtaining reliable answers about the best ways to fight global poverty. In brief, it involves dividing this issue into smaller, more manageable, questions–for example, the most effective interventions for improving educational outcomes or child health. They have shown that these smaller, more precise, questions are often best answered via carefully designed experiments among the people who are most affected.”

Duflo is co-author (with Banerjee) of the book Poor Economics: A Radical Rethinking of the Way to Fight Global Poverty (2011), which analyzes hundreds of randomized control trials to determine why impoverished people make certain decisions and how those choices impacted the trajectory of their lives. The book has been translated into 17 languages and won the Financial Times and Goldman Sachs Business Book of the Year Award. She has also written extensively on topics such as how to prevent HIV in Kenya, how teacher incentives can improve student results, how health insurance and microfinance can be bundled, how to improve immunization rates in India, and how social interactions affect 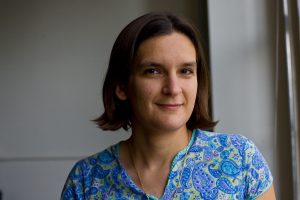 retirement plan decisions. Her book Good Economics for Hard Times (2019), also co-authored with Banerjee, takes a fresh look at areas such as immigration, job losses, inequality, tribalism and prejudice, and climate change with the help of recent economics research.

In an interview with NobelPrize.org, Duflo said that to devise effective policies to help people get out of poverty, it was important to understand them a little more deeply. “And without spending some time understanding . . . the intricacy of the lives of the poor and why they make the choice[s] that they make,” she said, “. . . it is impossible to design the right approach.”

As the Nobel Prize committee stated, “This new research has already helped to alleviate global poverty. It also has great potential to further improve the lives of the worst-off people around the world.”