The Berlin Social Science Center (WZB) awards the prestigious A.SK Social Science Award every two years to recognize researchers who make outstanding contributions to social and political reform. In a ceremony in Berlin in November, the WZB honored AAPSS Fellow Raj Chetty with the 2019 prize, recognizing Chetty’s pioneering research on poverty and social mobility in the United States. 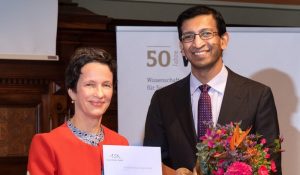 Chetty’s groundbreaking work is rooted in the creation of the Opportunity Atlas, a comprehensive atlas of children’s outcomes in adulthood using anonymized data at the census-tract level and covering nearly the entire U.S. population. For each tract, children’s earnings distributions, incarceration rates, and other outcomes in adulthood have been estimated by parental income, race, and gender. These estimates point out the high- and low-opportunity neighborhoods across the nation. In its award statement, the A.SK jury noted that the Opportunity Atlas “endowed American politics with the basis for differentiated and regionally specific reform efforts and political action.”

To view a video of Chetty’s acceptance lecture, click here.