On the morning of December 14, 1889, twenty-two people met in Philadelphia to form the American Academy of Political and Social Science. 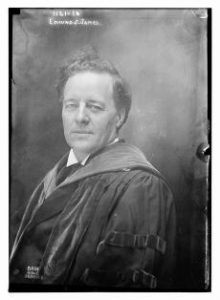 Led by Edmund James, the group created a forum to synthesize and advance research on contemporary political, economic, social, and policy issues. Unlike most organizations at the time, the Academy embraced a broad array of social science disciplines while concurrently serving as a forum for scientific thought and practical policy discussion. The goal was timely: the late nineteenth century witnessed an explosion of specialization and professionalization in the social sciences, a trend that threatened to splinter America’s understanding of major policy issues. The Academy wanted to rectify this problem by bringing in specialized and professionalized experts to voice and confront the problems collectively.

The Academy’s founders sought diversity in membership and authorship. At its founding, the Academy embraced the work of prominent women (Jane Addams) and African-Americans  (W.E.B. Dubois) in order to advance scholarship that was blind to historical discrimination. Although many of the original members were associated with the University of the Pennsylvania, members and writers soon came from across the country and across the globe.

The Academy’s founders created a democratic institutional system to ensure both the success and transparency of the organization. Past Academy leaders have included Woodrow Wilson (Vice President of the Academy from 1895 to 1905) and Herbert Hoover (Vice President from 1921 to 1964.) Other directors have been college deans, former Senators, philanthropists, successful businessmen and university presidents.

The ANNALS was launched a year after the Academy’s founding,serving as a bimonthly journal for the Academy’s scholarship. Beginning a tradition that was started soon after its founding, each issue of the ANNALS—as today—tackled a single topic, be it the Foreign Policy of Japan, Child Labor, or Contemporary Race Relations in America. Similar to the Academy, The ANNALS was established with the goal of embracing both practical and theoretical work and disseminating research across the country.

Over the years, the Academy has supplemented The ANNALS with pamphlets, monographs and, most notably, annual meetings about ANNALS topics. Such meetings historically drew crowds that numbered over 1,000 and garnered widespread coverage from periodicals such as the New York Times, Philadelphia Inquirer, and Chicago Tribune. Ambassadors, government officials, politicians, university scholars, and scientific and business organizations all attended the meetings, which covered a variety of topics over the years. Paper readings and important policy speeches by notable figures—such as then Vice-President Richard Nixon—highlighted the event.

In recent years, the Academy has moved from an organization reliant on membership and annual meetings to an institution that sponsors or co-sponsors conferences on social and political science issues such as “The Federal Statistical System at the Crossroads, (2009) The “Shape of the New American City” (2008) and “The Moynihan Report Revisited” (2007).  In 2000, the Academy inaugurated its Fellows program and in 2008 it created the Daniel Patrick Moynihan Prize, which recognizes those whose careers embody the public policy and social science based outlook of the late Senator, a former ANNALS contributor and Fellow.

As the Academy moves forward, it seeks to further the ideals of its founders through new media. Conferences are webcast, digitized ANNALS articles dating back to 1890 have been digitized, and new scholarship is pushed in directions once unimaginable at the turn of the nineteenth century. While these changes would seem foreign to Edmund James and the Academy’s 1889 founders, such developments only further the Academy’s original goals of scholarly excellence and the advancement and dissemination of practical and theoretical inquiries.