The decennial census is much in the news, unusual this far in advance of census day (April 1, 2020). The newsworthiness stems from growing concern that the next cen 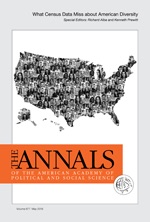 sus will fall short on the census’s most basic function: an accurate count of the nation’s population.  Much is at stake: apportioning congressional seats among states, redrawing legislative districts, allocating some $7 trillion taxpayer dollars over the 2020s for social programs and public works, and planning about private-sector investments and commercial operations.

Beyond these immediate, practical consequences is the grander responsibility of the census to paint America’s portrait, allowing us to better understand who we are as a nation and how we are changing. For this, data on race and ethnicity are central. White, Black, American Indian or Alaska Native, Asian, Native Hawaiian or Other Pacific Islander are the official race categories on the census: every American has the option to mark one or more of these race categories or to identify as “some other race.” Every American is also asked whether they are “Hispanic, Latino or Spanish origin.”  The elaborate data yielded by these two questions are often distilled into two categories:  one, under the cumbersome term “Non-Hispanic Whites,” represents the current majority of Americans who do not select one of the minority races or Hispanic ethnicity; the other, “minority,” includes everyone else. The system for collecting racial/ethnic data has changed multiple times since the first census in 1790 and will surely change again—though the 2020 questions will remain the same as in 2010 because of a recent decision by the Trump administration.

In this volume of The ANNALS, we ask: is the current census ethno-racial classification system doing a good job? Does it accurately reflect who we are, enabling us to track important social phenomena?  Does it provide statistics helpful to understanding demographic dynamics and who we are likely to become in the years ahead?  Because the census ethno-racial numbers are in great demand by government agencies, researchers, and private industry their reliability and comprehensiveness matter. It is with this in view that the authors examine the adequacy of the current classifications under four headings:

First, the Census Bureau has  projected a majority-minority society by the middle of the 2040s, when it anticipates that “non-Hispanic White” population will be fewer in number than all other groups taken together.  That projection is challenged in this volume, because it makes dubious assumptions about how ethno-racially mixed Americans see themselves, how they are seen by others, and how they will choose to identify themselves in the census. This large and growing group reflects a sharp rise in the rates of marriage and child-bearing across ethno-racial divides.  Mixed Americans—about 15 percent of U.S. births at present—are concentrated among children and youth; and three-quarters have one white parent and one minority one. How these individuals are classified has a large impact on the statistical portrait of the future U.S. and on the apparent scale of demographic change.

The Census Bureau counts ethno-racially mixed individuals as non-Whites, and this is seriously misleading. Many children of mixed couples—particularly those whose parents are White and Asian or  White and Hispanic—are beginning to integrate into the White mainstream.  This process resembles on a smaller scale the famous melting-pot of the early twentieth century, when Irish and Italian Catholics and Central European Jews were gradually “whitened,” and this whitening carried over into how they were identified in the census. There are indications of similar shifts occurring today; for example, the high rates of marriage to Whites by young adults from mixed backgrounds.

Second, missing data about “generational distance” from immigrant ancestors prevent us from understanding the impact of the modern, fifty-year immigration boom from Asian, Latin American, and the Caribbean nations.  Because the census no longer (since 1970) has a question on parental birthplace, we cannot distinguish second-generation Americans, born to immigrant parents, from the third and later generations.  This vulnerability in federal statistics makes it very difficult to identify salient national trends, for instance, which immigrant groups “whiten” over generations, and which other groups of Americans are increasingly “racialized.”  Given the intensifying political controversy over the effects of international migration to the United States, we need accurate census data on the long-term social and economic consequences of generational change.

Additionally, the social and economic mobility of post-1965 second- and third-generation Americans make it increasingly important to understand the ethnic (not racial) identities of these Americans. As individuals become more mobile, self-definitions of ethnicity become more fluid. Social scientists and policy-makers realize that misunderstanding these dynamics leads to incomplete and inaccurate views of America’s population.

Third, it is increasingly difficult to comprehend the differences among racial groups because variability within them is frequently greater than variability across them.  Research presented here documents why it is insufficient to group people merely into the standard racial buckets—White, Black, Asian, and so on.  The opportunities and achievements of Americans—and the socioeconomic barriers and unfair treatment they experience—correlate to national origin, immigration background, ethnicity and tribe, as much (if not more) as they do to racial category.  This is as true for Whites as it is for the minority races.  Education, employment, and housing and health policies require demographic distinctions that are lost in the current racial umbrella terminology.

Finally, Americans should concern themselves with the accuracy and thoroughness of census ethno-racial data. Recent social-psychological research finds that the political views of white Americans are influenced by how census statistics portray the society, especially when such data lend themselves to zero-sum characterizations such as “outsiders are taking my country away from me.”  This fear contributes to political anger and polarization.  When an oversimplified and misleading White vs. non-White binary captures political discourse, at times citing census data, it weakens America’s democratic discourse of inclusiveness, healthy diversity, assimilation, and “coming together.”

Demographic diversity of race, ethnicity, tribe, and national origins has never been easy to manage, but time and again it has proven to be more an asset than a curse.  The early twentieth century melting pot was a limited success, solving one problem (the alien Jews and Catholics) but seriously failing the American Indian, the freed slaves and their progeny, imported labor from Asia and Mexico, and the peoples of conquered Caribbean and Pacific islands. These failures became the agenda of our mid-century civil rights movement.

In the policy sphere of the civil rights era the statistical races used by the census quickly emerged as a vital if somewhat clumsy tool.  The Census Bureau worked hard to improve that tool—the option to mark one or more race by century’s end is a prominent example—but burdened as it was by an eighteenth-century racist classification, the Bureau could not keep pace with a very rapidly changing demography, accelerated by an immigrant surge that exceeded late-nineteenth/early twentieth century inflows in complexity and in magnitude.  The Bureau did develop a much improved ethno-racial classification for the 2020 Census, but it has been put on hold by the Trump administration, its fate uncertain.

In the past, the census was an indispensable tool for correcting misleading understandings of America’s population, and in the process created conditions that reduced social friction and facilitated a “coming together.”  It could be so again, as this ANNALS volume urges. A starting point would be to bury the majority-minority binary, replacing it with a new vocabulary that better captures our diversity, and integration/assimilation dynamics. The melting pot remains a powerful description of a moment in history when an earlier binary—WASP vs. non-Wasp crumbled, when doors were opened to Americans who for decades had experienced rejection, discrimination, and closed doors. We measured this progress as it unfolded, allowing for intelligent policy adjustments and private sector initiatives. The nation benefited greatly, making us who we are today—a significant step forward from the nineteenth century, but not yet what we should and can be in the twenty-first.