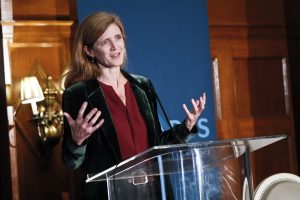 Former U.S. Ambassador to the UN Samantha Power discussed the current state of democracy around the world, the rise of China, and U.S. efforts to promote democracy in a public lecture that she delivered upon receiving the AAPSS 2019 Daniel Patrick Moynihan Prize. Power gave the seventh annual Moynihan Lecture on Social Science and Public Policy on October 3 in Washington, DC; it was televised by C-Span.

Power’s worldview has been informed by her work as a journalist covering politics, conflict, and genocide in the former Yugoslavia in the 1990s. She strongly advocated for the United States to take a more assertive role in combatting genocide, as detailed in her Pulitzer Prize–winning book, A Problem from Hell. Her early life, her career in public service, and her views on international diplomacy, problem-solving in complex circumstances, and the preservation of human dignity in the work of nations are documented in her newest book, The Education of an Idealist: A Memoir.

Power was introduced at the lecture by Avril Haines, Senior Research Scholar at Columbia University and former Principal Deputy National Security Advisor to President Obama. Haines described Power as an intellectual who wants to confront the most challenging questions, and as a civic leader who turns the focus on the human consequences of governmental action.

The 2019 lecture was cosponsored by SAGE Publications.