The 2011 Daniel Patrick Moynihan Prize was presented to Diane Ravitch, Research Professor of Education at New York University and former Assistant Secretary of Education, at a dinner ceremony at the future site of Moynihan Station in New York City on the evening of June 2, 2011. The $20,000 prize was created by the American Academy of Political and Social Science to recognize civic leaders who champion the use of evidence and informed judgment in the policy process. Dr. Ravitch donated her prize to three organizations: Save our Schools March, Class Size Matters, and Parents Across America.

Upon accepting the 2011 Moynihan Prize, Diane Ravitch noted that while she had met Pat Moynihan “on a number of occasions,” she wished she could have, now, the opportunity to “talk to him about what it means when so many things are being privatized, when hospitals are privatized and jails are privatized and libraries are being privatized.  And now there is a big move on to privatize our public schools.  I think we could have a very fruitful conversation and then we could talk about data.  I know that Pat cared a lot about data, but Pat understood that data is not evidence and that data can easily be falsified.” Data has been falsified, Ravitch says, to claim “miracle schools.” But, she emphasized, there are no such thing.  “Education is hard work,” she stated.  “It takes place one day at a time; children’s lives never are turned around overnight.  I think we could have had a great conversation because we know from Wall Street that data is far more easy to manipulate than people.  Pat Moynihan would have insisted not just on data but on evidence.” For a full transcript of Dr. Ravitch’s acceptance remarks, please visit Diane Ravitch: The importance of evidence-based data in education reform. 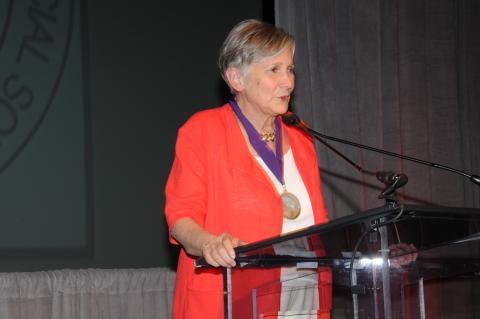