The 2010 Daniel Patrick Moynihan Prize was presented to Robert Greenstein, Founder and Executive Director of the Center for Budget and Policy Priorities (CBPP), at a dinner ceremony at the Newseum in Washington, DC, on May 13, 2010. The $20,000 prize was created by the American Academy of Political and Social Science to recognize civic leaders who champion the use of evidence and informed judgment in the policy process. Mr. Greenstein will use the prize to help CBPP to create a new State Policy Fellowship Program aimed at analyzing the impact of state budget and tax policy choices on low-income residents and promote positive reforms.

The prize was presented by David Ellwood, the 2009 Moynihan Prize recipient and Dean of the Harvard Kennedy School, who told those who gathered that “Bob does much more than get the facts right, he draws upon scholarship, systematic analysis, and remarkable political insight to stimulate the best possible policies at any given moment.” Ellwood lauded Greenstein not just for his use of evidence and “facts” in the policy process but for two other often-overlooked qualities. The first was his “astonishing political ability.…He can count votes with the best of them. He knows when to fight, and when to compromise. Above all he wants to make the legislation or the regulation better, not to simply make a grand political gesture.”

He also recognized Greenstein and the center for “the use of the best social science research” and described them as serving as “that vital bridge helping scholars move from the world of ideas to the world of politics and policy.”

In accepting the prize, Mr. Greenstein said, “as a nation, we face enormous problems—problems that may seem almost overwhelming.” In view of these problems, he added, “we will need academic research and analysis to help guide policy decisions to an even greater degree in the future than we have in the past.”

He went on to say that while there is no assurance that policy-makers will pay attention to the serious research and good ideas that come from think-tanks, universities, and other institutions across the country, “my colleagues and I at the center will be your partners in the future, endeavoring to help bring policy research and analysis to bear in policy debates in the extremely challenging times that lie ahead for our nation.” 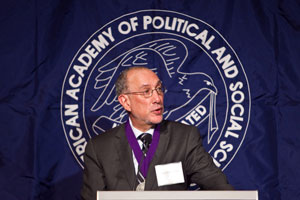