The 2009 Daniel Patrick Moynihan Prize was presented to David Ellwood, Dean of the Harvard Kennedy School, at a dinner ceremony at the Newseum in Washington, DC on May 7, 2009.  The $20,000 Moynihan Prize was created by the American Academy of Political and Social Science to recognize public officials and scholars who champion the use of informed judgment to improve public policy.  David Ellwood, who served as Assistant Secretary for Planning and Evaluation at the U.S. Department of Health and Human Services from 1993-95, is one of the nation’s leading scholars on poverty and welfare.

The 2009 Moynihan Prize was presented by Lawrence O’Donnell, Jr., senior political analyst for MSNBC, who served as a senior adviser to Senator Moynihan.  “I have been asked countless times in the last few years what would Senator Moynihan think about this or that issue of the day,” O’Donnell noted.  “I always say I don’t know.  Even when I have a very good feel for what his angle on the issue would be, I say I don’t know … because, at best, I could only tell you 50 percent of what he would think or maybe 80 or 90 if it was a simple issue.  But that final 10 or 20 percent, that surprising, often counterintuitive, thing that would make it a Moynihan idea?  Well, for that, you could only ask the man himself.  So, in the years that I haven’t been able to check with him first, I have never spoken for him.  Until now.

“I can tell you with absolute certainty that if he could be here tonight, Pat Moynihan would be honored to say the following words himself:
“For his distinguished record of scholarship, public service and strengthening the quality of government leadership, David T. Ellwood is presented the 2009 Daniel Patrick Moynihan Prize of the American Academy of Political and Social Science.”

Also speaking at the Moynihan Prize ceremony was William Julius Wilson, Lewis P. and Linda L. Geyser University Professor at Harvard University.  Wilson spoke about Moynihan’s major contributions to social science and described him as “bold and controversial…but the controversy was productive. This man’s work was agenda setting.  I am so pleased that he is finally getting the full recognition that he deserves.”

In accepting the Prize, Dean Ellwood spoke about the importance of encouraging more social and political scientists to work to influence public policy. “Something we are not very good at but we really need to be much better at,” he said, is thinking about “implementation, what works.  When do policies actually successfully get implemented?” He added that in academia there is a need to reward the policy fruits of intellectual labor. “To say, not only do we admire you if you have had an impact on ideas, but maybe if those ideas have had an impact on the world,” he stated. 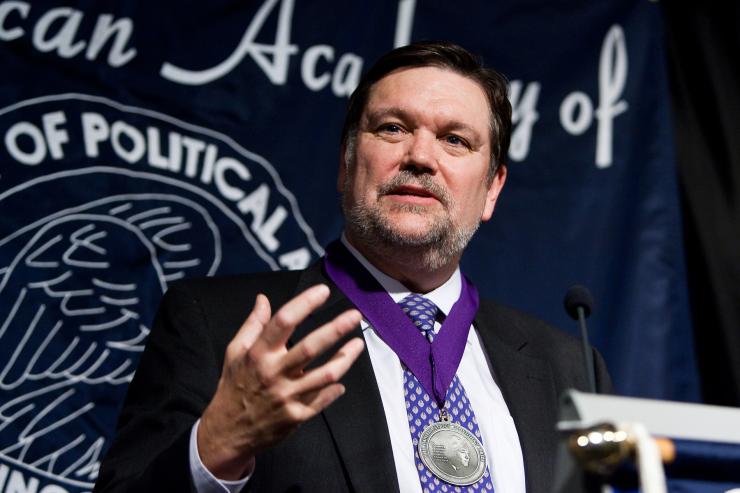