The American Academy of Political and Social Science (AAPSS) will award the 2022 Daniel Patrick Moynihan Prize to children’s rights activist Marian Wright Edelman. The Moynihan Prize is awarded annually to a leading policy-maker, social scientist, or public intellectual whose career demonstrates the value of using research and evidence to improve the human condition. 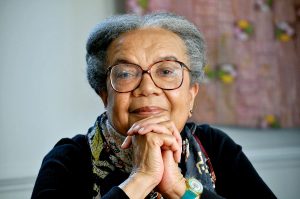 Edelman is the founder of the Children’s Defense Fund (CDF), a non-profit child advocacy and research organization established in 1973 with a mission to ensure that every child has a safe and healthy start to life and a successful passage into adulthood with the help of caring families and communities. As president of CDF for more than 40 years, Edelman positioned the organization as one of the nation’s fiercest voices on behalf of children and families, building bipartisan support for laws and policies that have helped millions of children to escape poverty; to receive needed health care, nutrition, Head Start and Early Head Start, child care, education, special education, family support services, and adoption assistance; and to have protections in the child welfare and juvenile justice systems, and protection from gun violence. Throughout, CDF has bolstered its advocacy with research, documenting issues and investigating solutions for children in crisis. Now president emerita of CDF, Edelman continues to challenge the nation to establish and improve programs and policies for children and families.

Edelman, a graduate of Spelman College and Yale Law School, was the first Black woman admitted to the Mississippi Bar. In the 1960s, she directed the NAACP Legal Defense and Educational Fund office in Jackson, Mississippi, moving to Washington, D.C., in 1968 to work as counsel for the Poor People’s Campaign, which had been started by Dr. Martin Luther King, Jr. to address poverty. Soon after, she founded Washington Research Project, a public-interest law firm that monitored federal programs for low-income families. Starting in 1971, she also served as the Director of the Center for Law and Education at Harvard University, where the earliest planning for CDF took place.

On awarding her the nation’s highest civilian award, the Presidential Medal of Freedom, in 2000—at the same ceremony at which Senator Moynihan received the honor—President Bill Clinton remarked that Edelman had “inspired … citizens, young and old, to join her through the years in the crusade that has become known as the Children’s Defense Fund, the base from which she has changed the future for millions of America’s children by grassroots actions and successful lobbying in Congress for health care, child care, education, and so much more.”