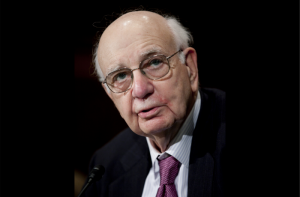 Volcker helped to shape American economic policy in public service for more than six decades. He was best known for taking an unflinching stance in combatting ever-growing inflation as Federal Reserve chairman in the late 1970s and early 1980s.

Volcker began his academic career at Princeton University’s Woodrow Wilson School, where he wrote his senior thesis on the problems with Federal Reserve policy in the wake of World War II. After his graduation in 1949, he went to Harvard, where he earned a master’s degree in political economy. Though he completed the coursework necessary for a PhD, he never finished his dissertation, instead taking a job as a staff economist with the Federal Reserve Bank in New York.

By 1962, Volcker had moved to Washington, D.C., to become director of the Treasury Department’s Office of Financial Analysis during the Kennedy administration. He subsequently served as deputy undersecretary of monetary affairs under Lyndon Johnson. Volcker returned to the private sector in 1965, but in 1969, he was persuaded to go back to Washington as undersecretary for monetary affairs in the Treasury Department in the Nixon administration. There, he struggled to preserve the Bretton Woods international monetary system of fixed exchange rates that had been in place since the end of World War II. As that system began to break down, he reluctantly helped to negotiate a replacement, developing a new structure that allowed countries to change the values of their own currencies.

Volcker became the president of the Federal Reserve Bank in New York in 1975. From that position, as he watched the U.S. inflation rates climb ever 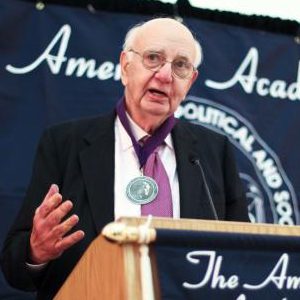 higher, Volcker became a vocal proponent of national belt-tightening, calling for a rise in interest rates to prevent the economy from spinning out of control. In 1979, President Jimmy Carter named him Federal Reserve chair. Volcker quickly announced a series of measures intended to control the money supply and thus rein in spiraling inflation. Though the immediate result was dramatically high interest rates, which led to two short recessions during his tenure as Fed chair, in the long run price stability was achieved. Inflation was brought down to a more manageable level, where it has largely remained ever since.

Volcker stayed on as chair of the Federal Reserve through the first half of the Reagan administration, but left that position in 1987 for the private sector. Soon after, he also agreed to chair the National Commission on the Public Service, a nonprofit organization with a mission to encourage private-sector leaders to serve in government. Through the 1990s and 2000s, he was tapped to chair a number of volunteer committees investigating concerns such as the United Nations’ oil-for-food program in Iraq, corruption at the World Bank, and the Enron scandal. He also chaired a committee created in 1996 to mediate the claims of Holocaust victims and their families against Swiss banks, ultimately brokering a $1.2 billion settlement.

As President Obama came to the White House in 2008, the United States was entering a deep financial crisis. Obama recruited Volcker to be president of the Economic Recovery Board, a committee established to help the administration navigate the recession. In that position, Volcker lobbied for a rule to prevent banks from making investments that do not benefit customers, to reduce financial risk-taking. This rule, enacted in 2010, was dubbed the “Volcker Rule.”

In 2013, Volcker formed the nonprofit Volcker Alliance, an organization with the twin goals of rebuilding public trust in government and enhancing the effectiveness of public administration.

In statements released on Monday, Presidents Carter and Obama paid tribute to Volcker. “His strong and intelligent guidance helped to curb petroleum-driven inflation, easing a strain on all Americans’ budgets,” President Carter stated. President Obama observed, “Paul Volcker believed not just in the power of markets but in the corresponding power of the government’s duty to make sure those markets work for everyone. Serving in Republican and Democratic administrations and as Chair of the Federal Reserve, he wielded his uncommon understanding of the American economy to make sure that families’ hard work was rewarded and secured. …”