Robert Greenstein to Step Down as CBPP President in December 2020

The Center on Budget and Policy Priorities (CBPP) recently announced that AAPSS Fellow Robert Greenstein, the organization’s founder and president, will step down on December 31, 2020, after nearly four decades leading the organization.

CBPP is a nonprofit, nonpartisan research organization and policy institute that conducts research and analysis on a range of government policies and programs. Established by Greenstein in 1981 and helmed by him ever since, CBPP has grown to be one of the nation’s most influential organizations in shaping domestic policy debates and achieving outcomes that reduce poverty and bolster economic and racial equity.

Before founding CBPP, Greenstein was Administrator of the Food and Nutrition Service under President Carter and helped design the landmark 1977 Food Stamp Act, the Carter Administration’s largest anti-poverty achievement. President Clinton appointed him to the Bipartisan Commission on Entitlement and Tax Reform in 1994, and he headed federal budget policy for the transition team for President-elect Obama. In addition to the AAPSS’s 2010 Daniel Patrick Moynihan Prize, he has received a MacArthur Fellowship, the Heinz Award for Public Policy, and the John W. Gardner Leadership Award from Independent Sector. 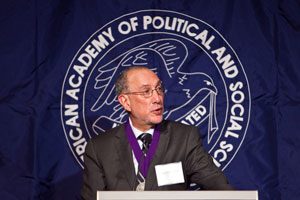 CBPP Board Chairman Kenneth Apfel noted that Greenstein, “driven by his unyielding belief that everyone should be able to live with dignity, support their families, and give their children a promising future, . . . has dedicated his life to ensuring that no one goes without basic necessities like food on the table, a roof overhead, or adequate health care. Through these efforts, he helped advance federal and state policies that have made life better for tens of millions of struggling people all over America.”