On May 17, 2018, Dr. John Holdren gave the 2018 Daniel Patrick Moyihan Lecture on Social Science and Public Policy at the Willard Intercontinental Hotel in Washington, 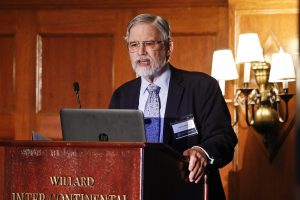 DC, to an audience of about 125 policy-makers, academics, and members of the media.

Holdren was awarded the Moynihan Prize in recognition of decades of work advancing science in the public interest, which culminated in the Obama White House as the President’s Science Advisor and head of the Office of Science and Technology Policy.  Holdren is the first natural scientist to be awarded the Moynihan Prize, signifying both the increased interdependence of the natural and social science communities, and his commitment to the social and behavioral sciences while in government.

In his lecture, Holdren gave a history of science advice in the Executive branch, and an overview of the roles of the president’s science advisor, dating back to the Roosevelt administration.  He made an impressive case for an independent science policy office in the White House, showing how it informed policy-making under President Obama, who was, Holdren said, “the most science savvy president since Thomas Jefferson.” 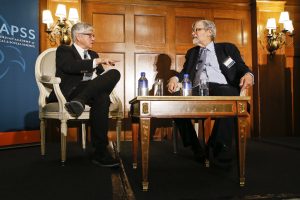 ssential for advancing our society, and science matters at the federal level because scientific progress is a public good that creates jobs, keeps us safe, keeps us healthy, and develops our economy.

Invoking the late Senator Daniel Patrick Moynihan, the namesake of the prize, Holdren said, “natural and social scientists, who have a penchant for evidence and analysis, should all find the courage to raise their voices about the reality of [Trump’s] propositions and work to restore science to its rightful place after Trump.” The late Senator, Holdren believes, would have been leading the charge to maintain the importance of science in the federal government.