Fellow Nicholas Lemann Explores the Decline of the American Dream

In his new book, Transaction Man: The Rise of the Deal and the Decline of the American Dream, AAPSS Fellow Nicholas Lemann—dean emeritus of the Columbia University Graduate School of Journalism—presents an economic history of the United States through the lens of its institutions. Examining corporations, government, labor, Wall Street, and online networks, Lemann analyzes where the U.S. economy stands, how it got there, and what we should do about it. 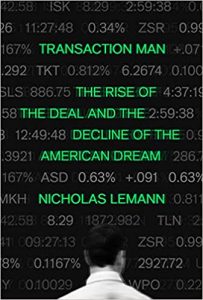 To illustrate the historical trends and explain current threats to the American Dream, Lemann draws on the personal histories of three economic “big thinkers” from the last century. He also narrates the rise-and-fall stories of two dominant U.S. businesses, General Motors and Morgan Stanley, detailing their 2008 crashes and subsequent bailouts.

In the end, Lemann calls for a system that allows for a “fair fight” between various entities—local and national governments, labor unions, corporations, Wall Street firms—that have adequate power to vie for their own interests and ultimately provide economic and social equilibrium. As Lemann concludes, such a dynamic system of checks and balances, where organizations work both in concert and in opposition, would distribute its benefits to a wider group of people, potentially bringing new life to the American Dream.