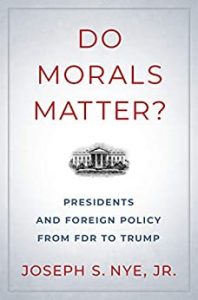 In a new book, Do Morals Matter? Presidents and Foreign Policy from FDR to Trump, AAPSS Fellow Joseph Nye, Harvard University Distinguished Service Professor Emeritus and former Dean of Harvard’s Kennedy School of Government, analyzes of the role of ethics in U.S. foreign policy since 1945. Providing a concise picture of the challenges that each of the fourteen U.S. presidents from Franklin Delano Roosevelt to the present met, Nye scores their foreign policy using three ethical dimensions: their intentions, the means they used, and the consequences of their decisions. At the same time, he discusses and rates the effectiveness of the leadership qualities of each president.

Nye argues that U.S. presidents need to factor in both the political context and the availability of resources when determining how to enact an ethical international policy; good intentions are not enough. As threats such as infectious diseases, climate change, terrorism, cybercrime, and the illegal drug trade cross borders and complicate policy decisions, Nye offers a guide for assessing moral reasoning, no matter what a leader’s policy preference or leadership style might be.