Democratic Vulnerability and Resilience in the United States 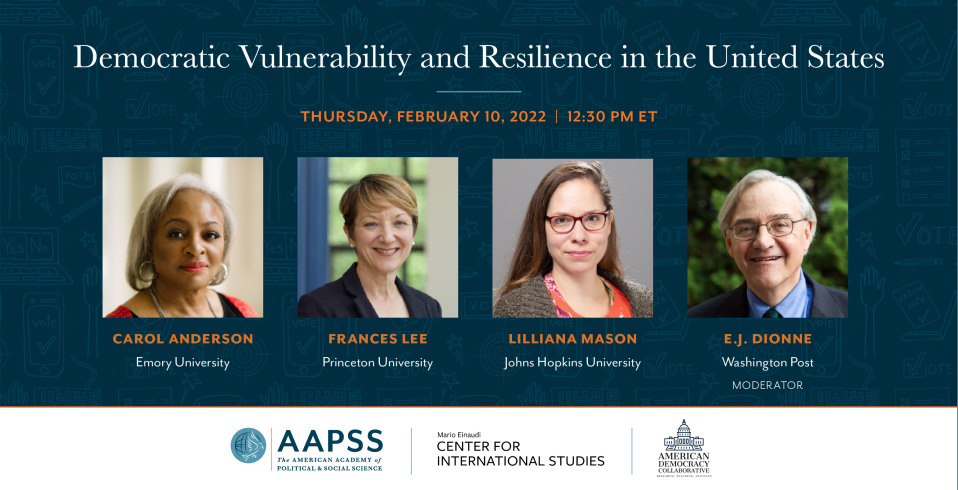 The turbulence of the Trump administration and a chaotic 2020 presidential election revealed vulnerabilities in American democracy, and raised the possibility that it could be threatened directly.  Many observers imagined that the election’s outcome might restore some sense of stability to a democratic system under stress, but 2021 was no tonic: we saw a violent assault on the U.S. Capitol provoked by fantastical claims of a stolen election; escalating conflict over voting rights, one of the basic pillars of a democratic society; and deepening partisanship and polarization over the basics of public health in a devastating global pandemic.

Recent polls indicate that a majority of Americans believe that democracy in the United States is in crisis. These sentiments are shared by supporters of both major parties. Featuring panelists Carol Anderson (Emory University), Frances Lee (Princeton University), and Lilliana Mason (Johns Hopkins University), and moderator E. J. Dionne of the Washington Post, this discussion focused on critical sources of both vulnerability and resilience for American democracy. What aspects of our democracy remain under threat? Are there areas where the drift toward democratic backsliding has halted, or even reversed?

This event was the first in our webinar series, Democracy in the Balance: Vulnerability, Resilience, and Reform, sponsored by the Mario Einaudi Center for International Studies, the American Academy of Political and Social Science, and the American Democracy Collaborative. These three panels will assess the state of American democracy and evaluate prospects for its reform and renewal, based on the latest evidence and insights from political and social science.