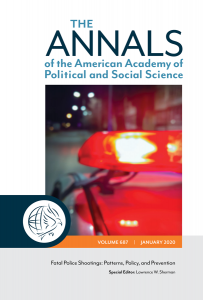 The January 2020 ANNALS volume offers substantial new evidence for initiatives at all levels of U.S. government that could help to save lives in police encounters with citizens. Putting that evidence to work remains the major challenge facing the American police.

In an address to the American Society of Newspaper Editors on April 20, 1950, President Truman declared that it was necessary for us to “make ourselves heard round the world in a great campaign of truth.” Calling attention to the vital importance of the psychological front in the present battle for world friendship, the President noted that the task of presenting the truth “to the millions who are uninformed or misinformed or unconvinced… is not separate and distinct from other elements of our foreign policy. It is as important as armed strength or economic aid.  ‘We must,’ he said, ‘pool our efforts with those of the other free peoples in a sustained, intensified program to promote the cause of freedom against the propaganda of slavery.'”
Read more…

The ANNALS exists to address society’s most important problems and concerns with high-quality research. First published in 1890, the journal took its current from in 1914: each of our bimonthly volumes takes up a particular social challenge or phenomenon, mustering research and evidence to illuminate it in ways that advance science and public policy.